Christianity isn't about 'Being Saved'

A few months ago I was talking with a friend who had been raised as a Christian, but decided not to remain so. We first chatted about the reasoning behind this decision (I'll address that discussion in future posts), but what struck me most was what my friend said at the end of the conversation:

I appreciate your offer Tyler because I know how sincerely you would like to think of me as "saved".

I'd totally forgotten that Christianity often gets presented in the context of "being saved" or "not being saved". This sort of language bugs me to no end. I grit my teeth when I see pamphlets like: 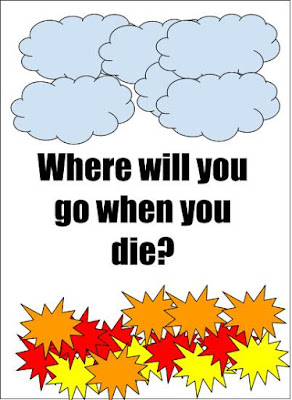 This is an absurd way to try to bring people into the Church. It's a fear-based approach that preys on people's insecurities. It has a tendency to treat faith as a binary function - you're either 'saved' or 'not saved'.  Greg Boyd equates this thinking to a marriage, asking (paraphrased): is the objective of marriage simply to be married?

Christianity is a set of beliefs and behaviors built around a relationship with God. Being 'saved' is a effectively a result of this relationship, in the same way that my continued marriage to my wife is a consequence of the time and effort she and I put into our relationship.

For years evangelicals have put too much emphasis on "praying the prayer" to become saved. This is like encouraging a man and woman to get married, but only focusing on saying the vows, ignoring the time required to get to know each other beforehand and the life of devotion afterward.

If you find yourself talking about faith with me, know that I'm not on a mission to 'save' you.  I'm trying to learn about you and share why I think Christianity is an idea worth considering.