Homeschool Curriculum Guide to the Siege of Abigail Beson

The Siege of Abigail Beson is historical fiction aimed at young adults. The story takes place in rural Virginia the summer of 1865 and includes a variety of historical references which provide anchors for discussion and further exploration into the history of the American Civil War. This page provides a guide for instructors using the book as part of their curriculum. 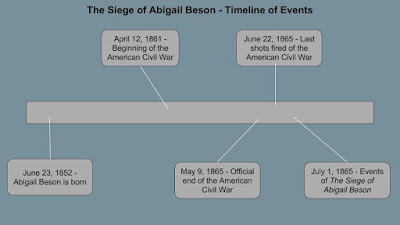 Part One: The Siege of Abigail Beson

Decode the hidden messages in these maps (click for large view): 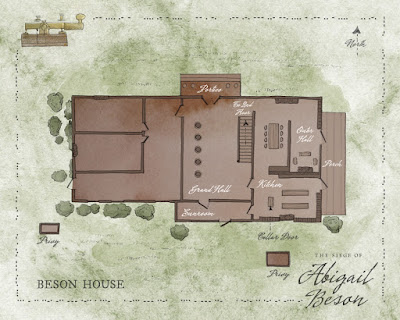 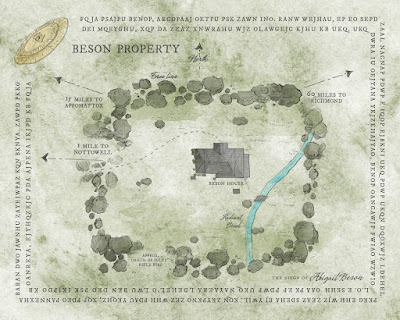 1. Who is the protagonist in this story? How do you know?
A. The protagonist is Abby Beson. The story is told from her perspective and focuses on events as they happen to her.

3. Why does Vera say people are pursuing her? What do we learn about her story?
A. Vera says that there were rumors her husband had taken gold from a bank and that criminals wanted to steal it. We learn that Vera actually stole the gold and that the militia was pursuing her.

4. Which part of the Beson house would you want to live in? Why?
A. Student should identify the eastern (used) and western (unused) portions of the house and provide a rationale for one or the other.

5. Why was it difficult for Abby's family to call for help? How would the story have been different if it happened today?
A. In the 1860s telephones had not yet been invented and most families did not have access to a telegraph. A family today would have been able to call for help with a cell phone.

1. Why might mail have been slow to arrive shortly after the end of the American Civil War?
A. The Civil War put a major strain on infrastructure, especially in the Confederate South. Many men were away from their homes and jobs due to fighting.

2. Who is injured in the forest? How is he or she injured?
A. Abby's brother Emery is injured. A tree falls on his leg during a storm.

4. Who does Abby encounter in the forest? Why is she surprised at who she meets?
A. Abby meets a group of Union soldiers. She is surprised because the soldiers do not know that the war has ended.

5. Who is Kingsley? Who does Abby think he is when they first meet?
Kingsley is a Union soldier who rode the horse Abby meets in the forest. His name is on the horse's saddle, so Abby initially thinks the horse's name is Kingsley.