Continuing this month's statistics theme, I also spent some time looking at my LEGO purchases over the last few years. During each of the past few years I've purchased between one and four thousand LEGO bricks. 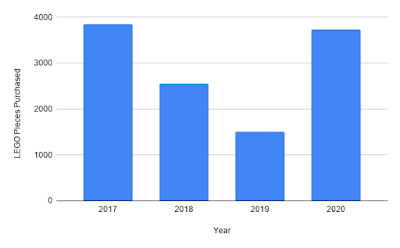 Bricks purchased per year
I am a very price-driven LEGO buyer, and it is rare that I purchase a set with a price-per-brick higher than $0.09. My per-brick expense has not varied much since 2017. I included some low-piece-count Technic and Duplo sets in this dataset, so the average skewed high in most years (this is why, in general, median is a better datapoint than average). 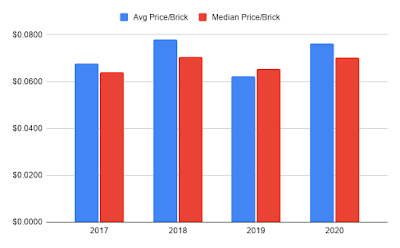 Average and median LEGO brick price from 2017.
LEGO pretty regularly turns over their product offerings, which means that popular sets become scarce a year or two after their first release. I compared my initial purchase prices for my sets to the the current lowest price on Amazon (not including shipping).

Price change for sets purchased in a given year to current lowest price on Amazon.
This chart makes it look like LEGO would be a great investment, but note that what I'm comparing is the asking price on Amazon, not the actual sale price. There are also significant fees when selling items on Amazon or eBay. Here's another look at the price change, this time by series. 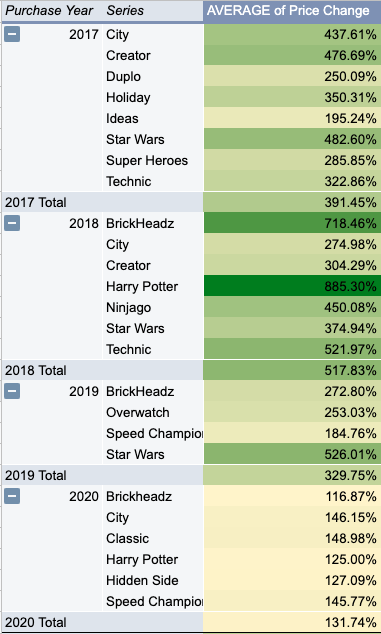 Price change for sets purchased in a given year to current lowest price on Amazon, by series.
LEGO Star Wars, Harry Potter, Technic, and BrickHeadz increased in value most consistently. The highest price increase, 885.30%, was actually for a Harry Potter branded BrickHeadz set, Harry and Hedwig (the only Harry Potter set I purchased in 2017).
This is a relatively small data set, but it does not appear that LEGO sets increase in value significantly in the years following their retirement. Sets from 2017 that are now retired are not consistently listed for higher prices than sets from 2019. I suspect this trend will continue until the ten or twenty year mark, at which the nostalgia factor will kick in.
If you're curious to see the individual set details, you can see the full spreadsheet here. I am really pleased with Google's improvements to their pivot table implementation.
If you enjoyed this post, you should subscribe to our YouTube channel, Bricks and Bikes!