Figure 1: Mega Drop (With Ramp)
About a year ago we took down a beautiful old box elder in our backyard. It grew on a hill behind our sandbox and swingset. It was big, wide, and had lots of large dead limbs that, unfortunately, were a safety risk for our kids (Figure 2). We had the tree cut down, and were left with a large (approximately 3' diameter) stump on our hill. 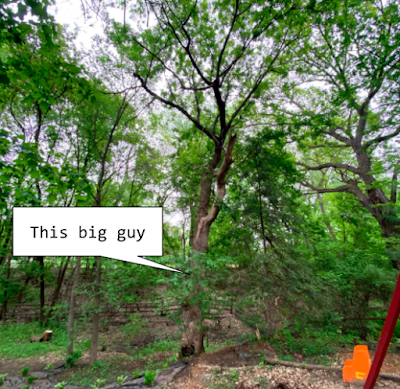 Figure 2: The Box Elder
For this project we used almost exclusively either scrap wood or wood from Home Depot's 70% off pile. I don't have a detailed price list, but I'd guess we spent about $40.
At first we wanted to build a tree fort, so we used some two by fours to make a level building surface on top of the stump, then we added treated decking boards to build a base. Almost immediately we realized that the "floor" we had created would make an awesome drop for our backyard singletrack trail. We extended the surface so that we had a deck leading from the nearby hillside path to the top of the stump. Soren dubbed this setup the "mega drop."
We used a variety of rocks, logs, and assorted backyard construction materials to shore up the design, then we tried it out.

Figure 3: Ouch
Although the drop was a reasonable height, the hill on which we had to land was sloped in two directions, which made landing rather tricky. After a mix of successful and unsuccessful attempts, we went back to the drawing board. We decided to change from a drop to a steep ramp, which would maintain the excitement of the descent without the frustration of the sketchy landing.