How I'm Marketing "The Siege of Abigail Beson"

As an introvert and a Minnesotan, the idea of asking people to buy something is really uncomfortable. None the less, I know that if I'm going to get my novella out there, I'm going to have to stretch my comfort zone.

Here's my plan for the duration of the KickStarter.

I'm only a few days into the KickStarter, but I have some encouraging data and some challenges:

I've gotten nine contributions totaling $294. This is awesome for just a few days into the KickStarter, but there's been a dramatic drop-off since day one. 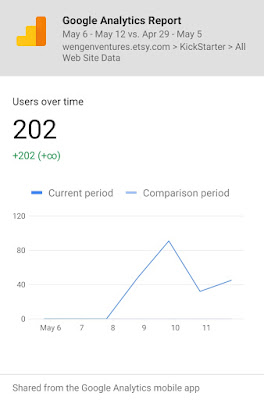 This has been a tougher nut to crack. Strangely, a search for The Siege of Abigail Beson doesn't yield a link to the KickStarter. Instead, it has a few links to KickStarter-related sites, as well as links to unrelated pages.

I've added (despite Google's objections about them being "low volume terms") some more specific keywords to see if I can improve that result.

I'm optimistic that I'll reach the minimal funding goal of $350. I'm hoping that folks who aren't convinced to click 'buy' on this round will give it another chance when the Kindle version becomes available later this summer.

We made it! It's available now on Amazon, Amazon Kindle, and createspace!
Posted by Tyler D. Smith at 11:43 AM

Email ThisBlogThis!Share to TwitterShare to FacebookShare to Pinterest
Labels: Marketing, The Siege of Abigail Beson